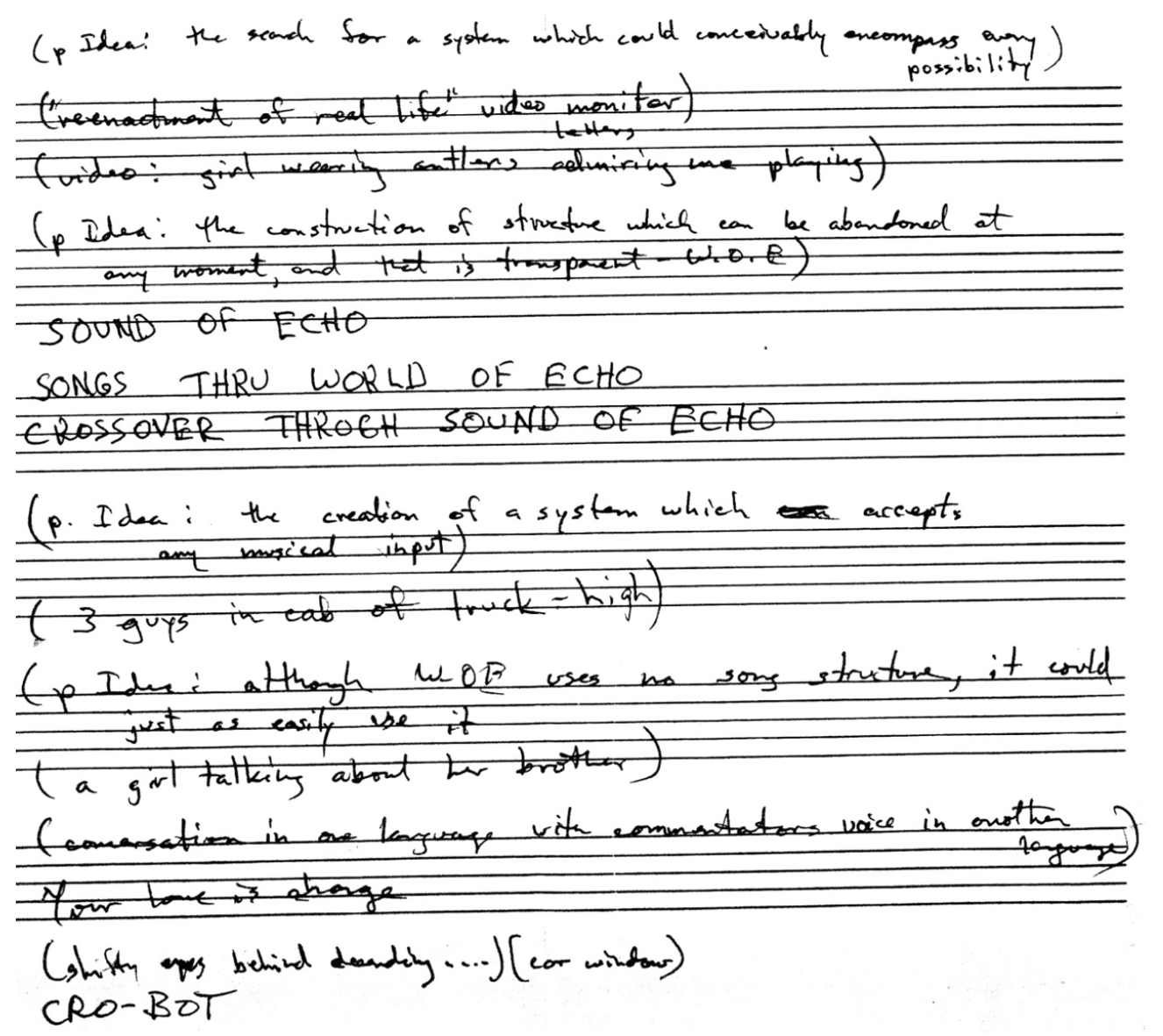 In his article for the New York Times Ben Ratliff was drawn to some particularly obscure writings in Russell's notebooks. Texts like the one to the left here, repeating the term "pIdea," are scattered throughout numerous notebooks from the 1980s. This relates specifically to Russell's 1985 masterpiece, World of Echo.

For this album Russell had left much of his rigorous notational methods behind. Rather he focused on repeating and permuting simple melodies while developing a rich conceptual philosophy to guide the process. The "pIdea" was a core aspect of this conceptual process. Based on a couple of less ambiguous passages (and the fact that they are all written in parentheses), I believe the "p" stood for "parenthetical"--so, "parenthetical idea."

P-Idea: (Develop dynamic relationship of material in and out of parentheses) (Use above as model for unaccompanied cello piece)

Russell had studied linguistics at Columbia, where his primary interest was in the nature of the vernacular, everyday talk. He was also steeped in the profound esoteric significance of symbol and syllable in Buddhism and North Indian music. Parenthesis provided a means of focusing attention in the moment, only, here, without any ties to a larger hierarchy of thought.

As with two hands cupped in prayer, anything within the fold of this parenthesis may become the content of Russell's meditations. For Russell parenthetical focus qualified the moment (or vice versa). His pIdeas are "first thoughts," flashes of spontaneous insight, creativity, and human experience. Russell developed this parenthetical philosophy to manifest an endless flux of changing qualities in his mind and music.

*This parenthetical concept guided Russell's lyrical writing—which was one of varied repetition and abstraction—the formal relationships of the songs—whose chorus, verses, and refrains are endlessly recombined—as well as his application of echo, reverb, and other effects. Every aspect of a given song was opened to parenthetical isolation and recombination. Below are some of the more significant pIdeas, compiled from several of Russell’s spiral-bound notebooks:

pIdea: (incidents of occult perspective, regardless of whatever they are—geometrical or accidental or other—involve a spontaneous pre-cognitive moment, improvised or other wise, in their creation of perception.)
pIdea: (the construction of structure which can be abandoned at any moment, and that is transparent-- WOE)

pIdea: (the creation of a system which accepts any musical input)
pIdea: (although WOE uses no song structure, it could just as easily use it)
pIdea: (the live segment was included also to demonstrate the acoustic or psycho-acoustic change apparent from recording situation to recording situation)
pIdea: (it’s clear that any style can be heard in the recording, yet critics continue to put a “price” on the trappings of form, really in the imagination, sometimes very cleverly)
pIdea: (the search for a system which could conceivably encompass every possibility)

pIdea: my training was not to combine musical genres, but to ignore them
pIdea: World of Echo attempts to acknowledge (that composers tend to compose the same song again and again in order to accomplish a change)
pIdea: an approach which extends the idea that “chance” is not only synthesized through various means but completely integrated into the process of working, and always has been
pIdea: improvisation which is based on time and space limitations and composition which is not properly concerned with limitations, including long list of impossible things, and the integration of the two.

These ideas could be silly, practical, visionary, observational, poetic, or seemingly non-sensible. Looking through as many pIdeas as I could, clear themes took shape. Above all there is the general reiteration of fusing structure and complete freedom or chance in the music itself; of an approach to repetition such that repetition is constantly altered; of the ephemerality of formal musical structure; and of the importance of the live moment in composing and recording—Russell wanted to incorporate these moments (and the different feelings/ideas that inhered to them) into the creative process.** He is explicit about this in another notebook entry:

How is it possible to combine a view of musical content with no sign posts, as to style structure, with a view that holds a decidedly deterministic attitude to content? By dividing the process into equal sections: living portions made up of actual life of the performer on the one hand, and deliberate choices arising out of thought and construct on the other. Inter-facing factors could be the number of sections of the former, identical in the latter only named and assigned to architectural and numeric functions, generally and entirely dedicated to the purpose of the vows. In the former the “equilateral” sections, abstract positions, partake of all available energies of the subject, in this case myself, improvisations, generic talents, knowledges, energies in the purer definition, that of dynamic union of space [silence] and movement [deliberate music], refresh the presence of the performance, the notion of identity, as well as the concept of architectonics joined within the continuity of the structural presentation actually perceived as the composition.

A parenthesis is rhetorically used as an afterthought, a qualification of something else. Russell turned this rhetorical device into an esoteric meditation that informed his relationship to music. While World of Echo features short songs and medleys of songs, nowhere is Russell's flowing parenthetical permutation more audible than in the long World of Echo performances recorded by Phill Niblock. This is also visually evident. For Russell had a set of alternating colored lights flashing as a friend tugged at an outstretched sheet of mylar. The performance gently flickers like the "play of color" in opal. And the music does the same. Listen to this extended version of "Answers Me" (here re-titled "Terrace of Unintelligibility") and notice Russell's constantly shifting vocal style, lyrical substitutions, cello techniques, electronic effects, song forms, and more--all while everything unifies and flows over you in the most gently fantastic way.