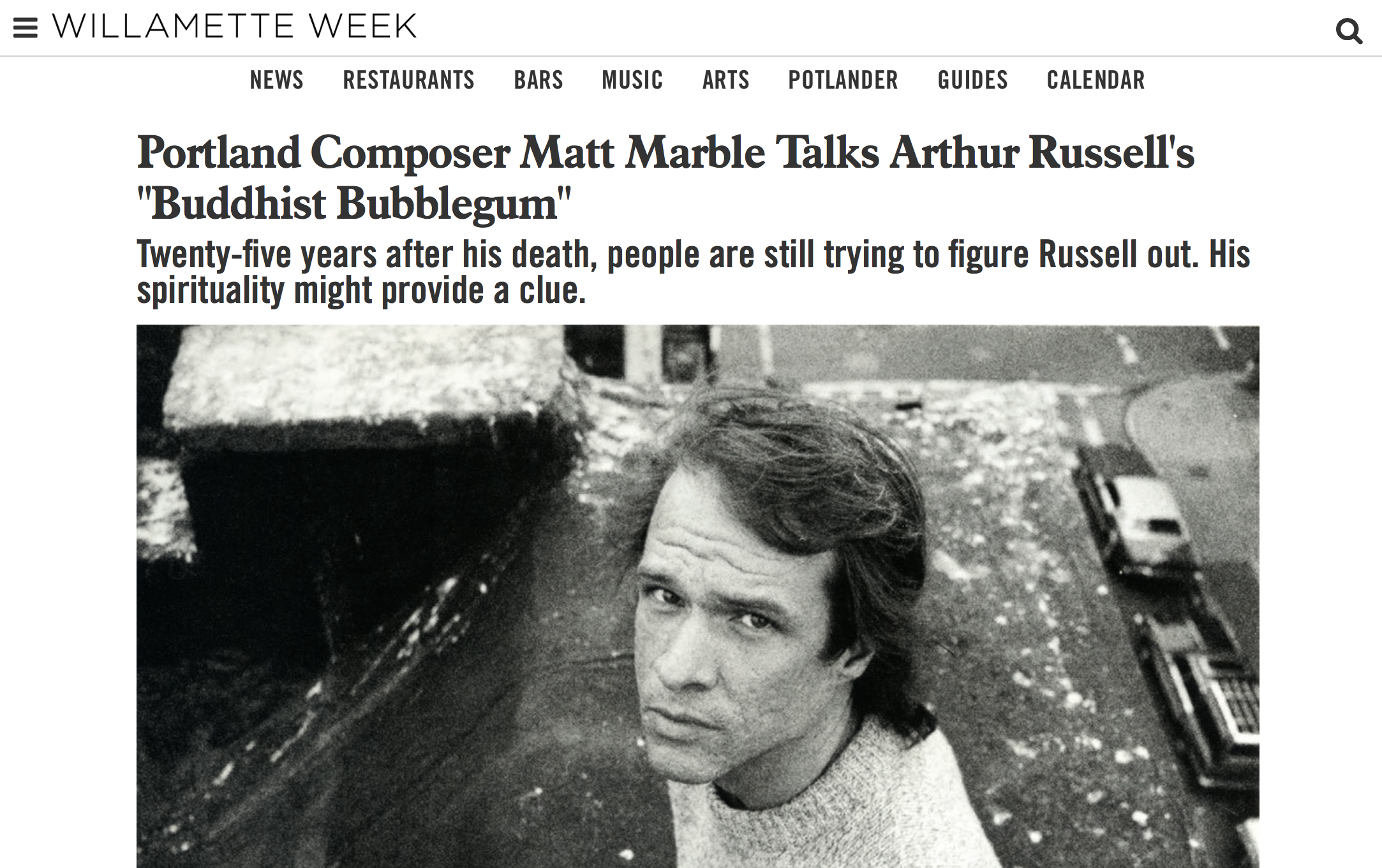 Twenty-five years after his death, people are still trying to figure out Arthur Russell.

A prominent figure of New York's downtown art scene of the 1970s and '80s, Russell traversed several musical worlds in his lifetime—from chamber music to power pop to, most famously, avant-garde disco—and imbued everything he did with a singular sensibility that's difficult to pin down.

Of course, that hasn't stopped fans from trying. This week, several Portland artists are gathering at Holocene to honor Russell on what would've been his 66th birthday. Among them is composer and scholar Matt Marble, who last year published a massive dissertation exploring the influence of Buddhism in Russell's work. Willamette Week spoke to Marble about what he found in Russell's archives, how his spirituality manifested in his music and his attempts to bring the temple into the club.

Willamette Week: Arthur Russell is an artist with many potential entrance points as a fan. What was yours?

Matt Marble: I first heard Russell's World of Echo when Audika Recordsre-released the album in 2005. Within seconds I was totally mesmerized—the gentle fluidity and virtuosity of Arthur's cello, voice, and electronic effects; the fusion of styles, from heavy metal to Indian raga, dance music to blues, minimalism and the avant-garde. Perhaps most all, I was seduced by that breath of fresh air from "some imaginary-far-off" place. I never tire of it.

In a general sense, what made Russell unique as a composer?

His fluid fusion of musical styles. His gentleness and virtuosity as a cellist, vocalist, producer and composer. The fearlessness with which he retained his chameleon self. His creative process and intuitive discipline, the "matrix system," which involves meditation, numerology, divination techniques, and improvisation. And that incantatory mood that one encounters in a disco single or an orchestral meditation, in a a pop song or in the echo of his cello hymns. It's the audibility of that "elsewhere" in the everyday, which he was always pursuing through music.

What first attracted you to the Buddhist elements of his music?

Music has always been a spiritual practice for me, personally. I am deeply inspired by esoteric traditions, and I seek out similar motivations in other artists. I had recognized hints of Buddhism in Arthur's music—the lyrical imagery of animals and natural phenomena, the use of drone, abstract language, symbolism, and experimentalism. I also heard and felt a thread connecting all the diverse styles of his output—I presumed this thread to be a spiritual one. But it was Tim Lawrence's book [Hold Onto Your Dreams[ and Matt Wolf's documentary [Wild Combination] that made this more explicit to me. At the same time, they left a lot unsaid. And then I reallywanted to know more.

I do think it's audible. But that's also a very subjective thing to me. And I think there are different entryways for different people. There's that Buddhist imagery throughout all of his work—tiger, rabbit, deer; moon, light, water—while some of his earliest scores are settings of Buddhist scripture to music, or musical applications of meditation and mantra. A lot of Russell's experimental approaches to music, which are very audible, are directly tied to his Buddhist practice, while his archives overflow with pages and pages of the mind behind the music.

As a teenager Russell lived with a Buddhist commune in the Bay Area. This led him to focus on Shingon Buddhism, the esoteric or "tantric" branch of Japanese Buddhism. He studied with a private teacher, Yuko Nonomura, for a few years. Russell also studied Tibetan Buddhist traditions, inspired by and critical of the writings of Chögyam Trungpa. These influences are all over Russell's music, from beginning to end.

He scheduled his recording times according to lunar astrology. He used numerology to determine band names or project, album and song titles. And he developed complex compositional methods to generate stylistically different works. Inspired by his Buddhist teacher in the 1970s, Russell's Instrumentals combined video-projected nature photography—clouds, flowers, mountains—with a compositional process I call the "matrix system." He also applied the matrix approach to his dance works, 24>24 Music, and his orchestral score for Robert Wilson's Medea (Tower of Meaning), while all of Russell's musical and spiritual influences converge and shine in World of Echo, his solo album from 1985.

Whether leaning in experimental or popular styles, there's a gentle otherworldliness or a comforting strangeness to most of Russell's music that I just deeply love. The strength of that gentleness and the imaginative celebration of tone, rhythm, melody, speech, drone, and noise—that's what my ear moves toward.

How did his spirituality manifest in Russell's disco productions?

Russell described disco clubs as "temples of music"—the music praised with high-end sound systems while diverse people commune in the ecstasy of celebratory music and dance. Recording as Loose Joints, Russell even invited club dancers into the studio to bring the club into the recording. While the music and lyrics were often inspired by Buddhist imagery, symbolism and philosophy—in tantric character, sexual and cosmic union fuse in Russell's dance tracks as well as on the dance floor: I wanna see all my friends at once/I'd do anything to get the chance to go bang/I wanna go bang.

He was also inspired by Tibetan abbot and scholar Chögyam Trungpa's philosophy of "crazy wisdom" and "first thought, best thought." This impassioned Russell to develop compositional strategies that empowered spontaneous moments, or "first thoughts," of musical insight. For his "mutant disco" opus, 24>24 Music, he applied complex compositional techniques, similar to those used in Instrumentals. Such methods were generally used to generate new material, to be improvised with, composed and recomposed.

At the same time, Russell was also seeking a Top 40 hit, and would gladly have embraced the material rewards. However, in the late 1970s Russell did claim he was planning to donate his earnings to help construct a temple for his Buddhist teacher. Russell described his dance and pop works as "Buddhist Bubblegum." Through the most popular genres of his time—disco, new wave, hip-hop—Russell sought to reach a mass audience with Buddhist-inspired messages of compassion, bliss, humor, mystery, and imagination.

You spent a lot of time poring over his archives. What did you find in there that most surprised you?

Gratefully, I am still poring over his archives. Always discovering something new, strange, hilarious and inspiring. His sense of humor and everyday observation ring out clear and and consistently in his notebooks. He freely mingled fragments of music notation, overheard conversations, ideas, creative strategies and musings, personal reflections and numerology. Reading these was endlessly fascinating. I reckon I was surprised by how thoroughly thought-out, yet completely wide-open, his creative process actually was. Though I had a sense of things before diving in, I was joyfully surprised to discover the shape-shifting intuitive discipline that Russell developed throughout his life. Wow.

Russell has become more of a celebrated figure in the decades since his death. But he was such a complex figure. Do you think we're remembering him correctly?

I think we're getting there. The work of Tim Lawrence and Matt Wolf were huge catalysts, while younger generations continue to discover Russell's music. Peter Gordon has been touring new performances of Russell's Instrumentals, while Bill Ruyle has been doing the same for Russell's Tower of Meaning—Russell's two largest works. I hope that my doctoral dissertation, Buddhist Bubblegum, expanding upon what we already know, offers for a deeper understanding of Russell's spiritual and musical practice.

This question also made me think of a song lyric from Russell's video collaboration with Phill Niblock, "Terrace of Unintelligibility": It's an unfamiliar sight/In an unfamiliar place/Outside the mirror. Who is Arthur Russell? How do you reduce a person to an easy description, when their whole life was devoted to transforming and transcending their self? Russell constantly changed musical genres and identities, while a single song could take on innumerable stylistic forms. But his music was really a lure for something much bigger. To me, the deeper impact of Russell's music is in the spiritual and cosmic perspective that flows through it all and that guided his curious compositional process. At least, that's what I've tried to communicate.